What to do in a country with a complex administrative structure, such as Bosnia and Herzegovina, in situations where the jurisdictions for making certain policies are at the entity level, and in the process of joining the European Union there are requirements for a unified country-wide approach? What if, to make things worse, there is a lack of political willingness to establish effective joint coordination, or a coordination mechanism is in place that does not work?

If there is no foothold in the jurisdictions (no superiority at the state level), and coordination does not work (no readiness), then what is the way to achieve a sufficiently unified approach in terms of domestic policies in the process of accession to the European Union?

The first blog opened these issues, and the second offered the harmonization of strategies and policies as a path to solutions. At the same time, we explained in more detail the indirect harmonization, as a way to bypass the goal, as in the popular one “the shortcut is shorter but the long way is closer/faster”.

What this means in the case of policies and strategies for small and medium enterprises in BiH is shown in the following figure: 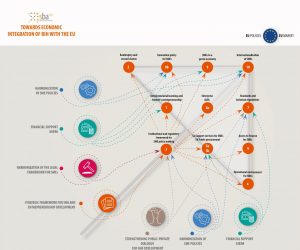 The European framework for supporting the development of small and medium-sized enterprises is contained in the Small Business Act (SBA). This framework act contains ten principles, which have been transformed into twelve dimensions of the SME Policy Index, used by the OECD, EU, ETF and EBRD to assess the implementation of the SBA in the Western Balkans and Turkey. In the figure above, these twelve dimensions are represented by numbers (1, 2, 3, 4, 5a, 5b, 6, 7, 8a, 8b, 9 and 10) and the corresponding dimension names.

The first type of harmonization, which is being successfully completed in BiH, is the harmonization of the laws on small and medium enterprises. Now a bit long ago 2010/2011 year, the adoption of a single Law on the Promotion of Entrepreneurship and SMEs in BiH failed, because there was simply no constitutional basis, nor political will, for the adoption of such a law. Based on the lessons learned at the time, the idea of ​​harmonizing the relevant laws in the Federation of BiH, Republika Srpska and the Brčko District of BiH with the SBA – European Framework Act for SME development was developed. Thus, the following things have been incorporated into the new versions of these laws:

On such a basis, the Law on Amendments to the Law on SME Development in the Republika Srpska, which incorporates all these elements, was adopted in October 2019. The Law on Stimulating Small Business in the Federation of BiH, with the same elements, has been adopted in draft form and now is in the final stage of adoption in the form of a proposal. The same changes to the Law are in the final stages of preparation in the Brcko District of BiH.

It could be argued that this did not ensure uniform legal treatment of SMEs throughout BiH. True, but we have come out of the “stalemate” position, made serious progress along the way and created the preconditions for further harmonization of strategies and policies to support the development of SMEs throughout the country.

In this way, we come to the second type of harmonization: harmonization of SME development strategies, as the first step in the operationalization of the ten principles of the SBA, which are incorporated into the relevant laws of both entities and the BD BiH.

In this case, it is very helpful to break down the complex issue of SME development support into the dimensions of the SME Policy Index. Why? Because the answer to the direct question of which level is responsible for adopting the SME development strategy is simple and direct: the entities, the Brcko District of BiH, the cantons in the Federation of BiH. And when you break down the complex issue of SME development support into twelve dimensions, contained in the SME Policy Index, as the first operationalization of the SBA, you see that, in addition to the entities, BD BiH and cantons, the state level (BiH level) has competencies in several dimensions (5b, 7 and 10) for which appropriate strategies and policies should be defined, harmonizing them with the European framework, but also facilitating the evolution of a unified approach in terms of support in these dimensions throughout the country.

This nuanced view of things also leads to a different definition of strategy: instead of a single strategy, we are now talking about a single strategic framework, which is complex because it is a complex country structure in which to adopt and implement. Such a framework is presented in the following figure: 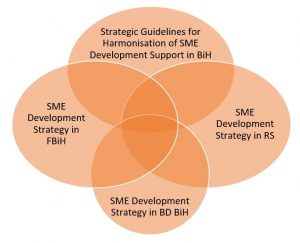 The basic idea is that each level deals with the dimensions and types of support for which it has competencies, while taking into account compliance with the European framework and mutual harmonization. And this idea is well on its way to being realized soon. First, key actors from the ministries dealing with SME development at the level of BiH (Ministry of Foreign Trade and Economic Relations), Republika Srpska (Ministry of Economy and Entrepreneurship), the Federation of BiH (Federal Ministry of Development, Entrepreneurship and Crafts) and Brčko District of BiH development, sports and culture) have jointly developed a methodology for strategic planning of SME development, which is harmonized with the SBA and the SME Policy Index, but also with the already standardized framework for strategic planning in BiH. Then, in a harmonized way, the process of creating SME development strategies began, each level within its competences, with the same methodological and substantive guidelines, which enable integration into the European framework. The SME Development Strategy in the Republika Srpska for the period 2021-2027, done in such a way, has already been adopted. The final version of the Strategic Guidelines for Harmonization of Support to SME and Entrepreneurship Development in BiH for the same period, harmonized with the entities and BD BiH, is waiting for the resolution of the current political “stalemate” in the work of joint BiH bodies, to enter the formal adoption procedure. The process of drafting an SME development strategy in the Federation of BiH is finally starting, after the adoption of the Federation of BiH Development Strategy 2021-2027, which has already incorporated a number of interventions related to SME development. Key elements of methodological and substantive guidelines for SME development have already been incorporated into the Development Strategy of the Brčko District of BiH 2021-2027, which was adopted this year, and based on it, the sectoral strategy for SME development is being finalized.

Again, one could object: (1) harmonization of strategies is not proceeding at the desired pace; and (2) such a strategic framework for SME development in BiH does not provide a single support to the development of SMEs in BiH.

My answers are short: (1) it is happening faster than a number of other things in BiH; and (2) instead of the “single support” that is usually understood in our country as a “single strategy” provided “from one place”, it is much more practical (and more realistic / feasible) to make each level responsible for exercising the competencies assigned to it by the Constitution, in accordance with the complex structure of the country. Of course, in a harmonized way, because it is a single country, which should ensure a sufficient level of internal (and external) coherence of strategies and policies.

In this, the third blog on the same topic, with the shortest presentation of the appropriate European framework, we dealt with indirect harmonization, which is used in harmonizing the legal and strategic framework, because they represent the basis for harmonization of other, specific policies and instruments to support SME development in BiH. Other types of harmonization will be addressed in the following two blogs, from two different angles: top-down and bottom-up harmonization, again using examples of SME development policies.