As one of the results of the project “Digitalization as an incentive for enterprise competitiveness in BiH”, the study “Information and Communications Technology – Fuel for SME Competitiveness” was published.

The study was prepared using information gathered during visits of 27 metal and wood processing companies and 11 supporting institutions, when interviews were conducted with their directors and relevant data were collected using a questionnaire. The findings were validated and completed with inputs gathered from participants of round tables held in Banja Luka, Zenica and Mostar.

The study presents the situation regarding ICT usage in metal and wood processing industry in BiH; current trends, key fields and level of ICT usage in production; digitalization examples from medium-sized companies in Germany; required measures to support B&H production industry in digitalization, as well as the role of supporting institutions / organizations in this process.

The study was published by GIZ within the project “Digitalization as an incentive for enterprise competitiveness in BiH”, which is funded by the European Union and GIZ (within the EUProLocal program) and implemented by PEM Consult in cooperation with Eda, while authors are German experts and members of the Eda team.

The study can be downloaded here: http://bit.ly/2z1xMgc. 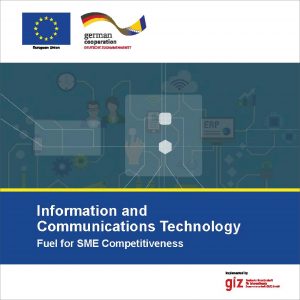