Within the project “Transparent and Accountable Public Enterprises in BiH – TAPE”, a press conference was held regarding prepared amendments to the entity Laws on Public Enterprises, as well as prepared guidelines for preparation of annual business plans and reports on operations of public enterprises.

The press conference was attended by: Slobodanka Dukic, Coordinator of the Project “Transparent and Accountable Public Enterprises in BiH – TAPE”; Saša Savičić, Head of the Department of Legal Affairs at the Ministry of Industry, Energy and Mining of Republika Srpska; Aleksandar Smiljanić, Head of the Economic Sector of the public company  „Budućnost Laktaši“; Brankica Radulović, Governance and Local Development Adviser and Miloš Šipragić, moderator.

At the conference, amendments to the entity Laws on Public Enterprises and to Regulations on transparency of financial relations between public enterprises, local self-government units and entities (in Federation of the BiH also Cantons), whose adoption and application would contribute to improving transparency and accountability of public enterprises.

The amendments were prepared with support and active participation of the working group consisting of representatives of public enterprises in BiH, entity and cantonal ministries, as well as city and entity / parliamentary assemblies, while the guidelines with models of business plan and business report were prepared with support of operational teams from 10 public enterprises in BiH.

A press release on this event in local language is available here.

The project “Transparent and Accountable Public Enterprises in BiH – TAPE” is funded by the Kingdom of the Netherlands. 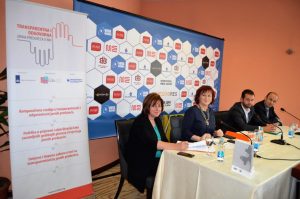