An internal workshop on the first findings of the research on status, capacities and practices of innovations, as well as barriers and possibilities for improvements of innovation was held in Eda. Research is conducted towards the end of 2017 in selected enterprises from metal and wood processing sectors. Systemic competitiveness framework was used for presenting research findings, their mutual relations and for discussion on the findings. 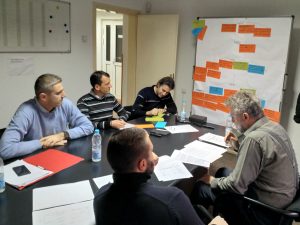